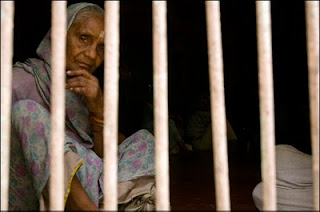 Dear White Rainbow Project Friends,
Today is International Women's Day and it is fitting that I update you on our recent trip to work with some of the most maligned women still on the planet, the destitute widows of Vrindavan, India. Through no fault of their own, these women are relegated to much lower than second class citizens just because they had the misfortune of out living their husbands. Amazing in this day in age.

Jon, Hannah and I had an eventful 10 day trip to India. The weather was great. Cool

in the evenings and mornings and not many bugs. Much better than my last trip in July! 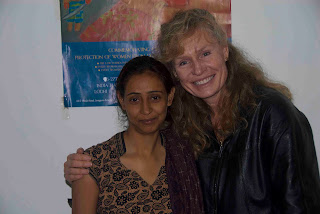 nurse at the widow’s shelter. She made Peppermint Bark and sold it at Christmas time to friends and fellow students. Way to go Hannah! She is a wonderful young lady with a great attitude who will go far in life.

We arrived early Sat. morning, slept for a few hours at a modest hotel by the Delhi airport and then headed out on a three hour journey to Vrindavan that same afternoon to stay at Ma Dham the widow’s shelter run by the Guild for Service. We were joined by Jenni, a Finnish radio journalist and Rosa, a Spanish philanthropist, who had both seen the film “White Rainbow” and were interested in seeing how they cou 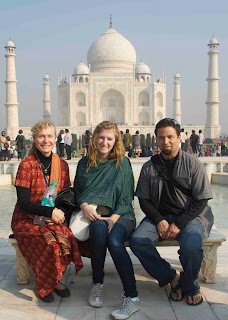 ld help spread the word about the plight of the widows in Vrindavan.

The widows and the staff warmly greeted us when we arrived at Ma Dham. The next morning we handed out small gifts (body lotion and nail clippers) to all the women. Many of them had never used nail clippers before and had to be shown how to work them. They had been using razor blades before so this was a welcome change. It was such a great experience to be able to show love with just a simple gesture.

They have a new nurse named Neeru who is wonderful. She is in her early 20’s and has the sweetest smile. She really enjoys her job and takes such good care of the widows. She was hired a few months ago by the Guild after we had offered to support a nurse at Ma Dham.

On Wednesday, we went into Vrindavan and visited the Bajan Ashrams where the widows chant and got a tour from one of the men that work there. He wanted a donation for the temple of course. It was just like a scene out of the film. We visited a bazaar so that Hannah could get some gifts for her friends and supporters. At sunset we went on a boat ride on the famous Yamuna River.

Whenever I visit Vrindavan and see all of the widows who are still uncared for it makes me realize that there is still so much more to be done here. Cynthia, who was formerly living at Ma Dham, has rented an apartment in the city so that she can get a clearer picture of how to be more effective in helping the most needy widows. She has made some new connections with other Indian non-profits that are working with the widows. One organization is the Methodist Health Center that hosts medical clinics and helps widows get their pensions. We hope to learn more about their work to see if we can be of help to them as well.

On Thursday we met with Asha James who is one of my favorite friends in India. She is helping us put together our fund raising initiative of having compassionate Indian women donate their beautiful saris for us to make unique tunic tops and gift bags to market here in the states. We hope this helps support our mission of caring for destitute widows in Vrindavan. She showed us some of the new samples, so we are excited to share them with you. You can check them out on our website on the White Rainbow Collection tab or directly link there here at www.whiterainbowcollection.myshopify.com.

On Saturday morning we visited the Taj Mahal. This was my second visit and I do have to say that it gets more majestic each time that I see it.

Before heading out to the airport, we went back to Ma Dham for our final good byes. It is heart breaking to say good-bye to those sweet, sweet widows and the hard working staff. We feel like we have really made some special relationships there. We headed back to Delhi to catch our late night flight back to LA with so much to be thankful for!

India is an amazing place that cannot be fully described until you go there. We all thought that we were going to die several times on the crazy highways, and the things you see will blow your mind, like 5 people on a motorbike and 18 people in an auto rickshaw meant for 4. There are cows, pigs, dogs, monkeys, camels and even some elephants everywhere on the streets that have open sewers and trash overflowing on them. And don’t even get me started about the smells and the air pollution, but the best part about India is its people. You will never meet more hospitable and kind people anywhere else on earth. Like I said, you just have to experience it for yourself.

Who wants to join us for the next trip?