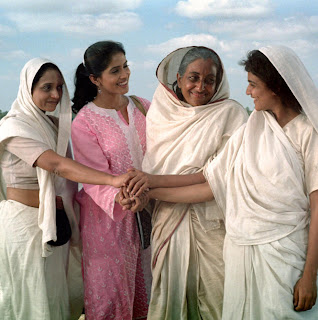 After reading about the plight of the widows of Vrindavan in Homeless Bird and then learning more of the facts after reading numerous news articles, We were convinced that more people needed to know about these women who were living in the shadows -and who by no fault of their own - were shunned from society and deemed worthless. My husband, Dharan, grew up in the South Indian film industry. His uncle, Sivaji Ganesan, was one of India's greatest film icons, starring in over 300 films during his illustrious career. Having already produced several Indian films and also directing our first collaboration, Ele, My Friend, Dharan was convinced that this story needed to be told using the powerful medium of film. We hoped this would bring the attention these women deserved, as more and more people would come to know about the "City of Widows".

Using stories gleaned from interviews that the Guild of Service had conducted from over 4000 widows, common patterns began to emerge, Dharan used the common themes to create four characters. Pryia, the central character, was loosely based on Mohini Giri's own story of empowering the widows and giving them hope. Roop was based on the numerous other widows who had been thrown out by their families. Mala was based on several women who pretend to be widows so that they can escape abusive husbands and in-laws, and young Deepti was based on the collective stories of young widows who were lured to Vrindavan on false pretenses and then used as prostitutes.
Writing the screenplay was the first step on our long journey... I will fill in the details in future posts - but for now I just want to focus on ways to make a tangible difference for these women. I want to use this film which was a passion project, to kindle a passion in others, to make a difference. I feel that God is calling me to use my life experience to show His love and compassion for these unfortunate women. If you feel it - then join with me and encourage others to get involved so that positive changes can be made! My good friend, whose husband organizes medical trips to Haiti, encouraged me to start service trips to Vrindavan after she watched White Rainbow. I'm going to take her up on her challenge. Besides starting my own trips - I want to highlight and raise funds for other groups that are already doing so much for the poor and downtrodden of the world. The ones that are unjustly treated. Please email me or comment on this blog if you know of groups that I can promote.
Posted by Linda Mandrayar at 4:48 AM No comments:

The Guild of Service-Helping Widows others have Forgotten

While doing our reasearch on the plight of the widows of Vrindavan, one organization stood out as a beacon of hope for these helpless and shunned widows-The Guild of Service-Started by one woman, a widow herself, Dr. Mohini Giri . Losing her husband when she was 50, Dr. Giri endured the social humiliation that comes with being a widow. At times, she was asked not to attend weddings because her presence was considered bad luck. "Generally all widows are ostracized," she says. "An educated woman may have money and independence, but even that is snatched away when she becomes a widow. We live in a patriarchal society. Men say that culturally as a widow you cannot do anything: You cannot grow your hair, you should not look beautiful." She adds, "It's the mind-set of society we need to change -- not the women."
The Guild of Service first set up a refuge called Amar Bari, or "My Home," in Vrindavan. It became a refuge for about 120 of India's widows. They have just recently opened a second home Ma-Dham, a home for both young and old widows in Vrindavan. It has a capacity for 500 women. A small hospital is available on the premises, as well as a center for practical medical/nursing training and education. The older women who live here find a safe refuge with a healthy environment, and dignity of human life. They are taught some basic cottage industry skills to keep their hands and feet moving. The younger women are taught valuable skills for earning so that they can take control of their lives. These skills range from nurses' training, to improving computer skills, to training in embroidery skills, etc. The Guild of Service is making great strides in helping these women, but much more still needs to be done. As Dr. Giri states "mine is but a drop in the bucket."
My goal is to work with the Guild of Service to raise needed funds and to start Service Trips so that people from all over the world can get involved and help these forgotten women. Please contact me if you want to learn how you can get involved!
Posted by Linda Mandrayar at 4:06 AM 5 comments: