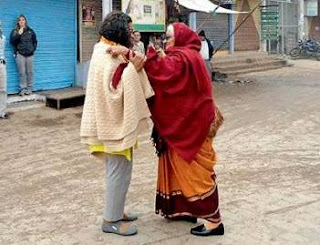 What an Amazing show Oprah did on the "City of Widows"! I am so glad that so many more people are aware of the plight of the widows there! Her interview with Dr. Giri was intense and eye opening. The reality that these women chanting in the ashrams and begging on the streets is demeaning and the hope that one day the widows seeking shelter in Vrindavan will finally be treated with the dignity and respect they deserve is what drives me to continue the work with the White Rainbow Project. Won't you join us! Visit our website www.whiterainbowproject.org to learn how you can be a part of the change for these women! As Dr. Giri so eloquently stated in the interview, now that Oprah has shed light on this injustice positive change is sure to come soon! 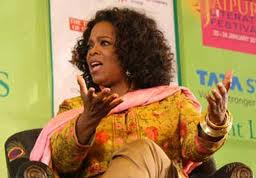 Thank God that Oprah has finally visited Vrindavan! Years ago when I first made the film "White Rainbow" producers from her show contacted me about being interviewed about the film and the plight of the widows in Vrindavan. Sadly nothing came of it. Now just last week, Oprah has seen their misery for herself! Here is a quote from her recent interview with Barkha Dutt a journalist in India about that experience. Now I hope that she will be able to watch "White Rainbow" to get a clearer picture of what their lives are really like. Go Oprah! When you speak the world does listen!
Oprah Winfrey: Well I have to say, that meeting with the widows, caused a shift in my own consciousness. You know, as I was saying, I wanted to use, and chose to use this platform of television for illumination. But there was a moment standing there with Dr Giri who's taken in as many widows as her pocket book will allow, that I realized that the marginalisation; you know I've spoken for years about the marginalisation of women, I've spoken for years on my shows about the need for women to own their own voices and to be able to hold the space for themselves. And that the greatest freedom in the world, the reason for freedom is that you get to decide for yourself what to do with your life. That's what real freedom is. And I'm not just an advocate for that, I live that, you know, being a woman who stands inside herself. So standing in the Ashram, with all of these widows who have been discarded simply because their husbands died. The shift for me was, this should not be allowed to happen. I immediately emailed my friend, Maria Shriver, who for years has held a woman's conference in the state of California, and I sent her the pictures of the widows, and said that you and I have to combine our efforts and we have to get with every other woman that we know, to combine our efforts and to make sure that this kind of thing gets eradicated in the world. It doesn't make any sense. Where intelligent women stand to allow the pervasive discrimination of a woman because her husband died, for something you don't have any control over. So you become a second class citizen. But I also had an 'Aha' moment in the midst of it because it's so easy to judge and say, "Oh my God, look at what they're doing". In the midst of interviewing Dr Giri, she said you know it happens, because I was asking is it just a, is it a caste thing, the situation? Or is it a class situation? Because certainly if you are a woman of privilege and your husband dies, this doesn't happen to you. She said you know it's subtle. When you're a woman of privilege and your husband dies, you just don't get invited to as many parties. You're not included, true? And you know when she said that, for the first time I thought, you know I've never spoken to widows in the United States, I'm sure it's true all over the world. Over the world, it happens. What I saw with the widows with her, is the extreme, but you just become a little less in the eyes of your friends because they think that death is contagious, and if it happened to you, then it reminds me that it could happen to me. So I think that attitude, that shift in attitude, needs to happen. Shift in consciousness, needs to happen all over the world, but certainly here. I'm going to be working with Dr Giri to see what I can do to support that. It's one thing to support the widows. And then she was saying you have to chant all day for 2 rupees and a bag of rice and you're discarded by your families. That doesn't make any sense to me. I couldn't understand the paradox of a country that loves its family, loves its tradition and has such respect and honour for their elders, and how do you get cast aside because your husband has died. Women outlive men all over the world. So automatically being, being made a second class citizen. That is a big issue for me.

Barkha Dutt: You have, as you said, been exposed to the paradox of India, the glitterati ..

Oprah Winfrey: India is a paradox.

Barkha Dutt: India is a paradox

Posted by Linda Mandrayar at 1:21 PM No comments: