Last March, Northern Kentucky University photography professor Barbara Houghton visited Ma Dham to document the work Dr. Giri is doing to help the widows of Vrindavan for her photographic essay titled "Changing India, one Woman at a Time". She invited Dr. Giri and I to come for the gallery opening on November 15th. She also arranged to have Dr. Giri speak on the status of widows in India and screened "White Rainbow" at her University as well as neighboring Xavier University. It was a wonderful trip. Barbara and her husband Keith, hosted us at their lovely home set in the woods and served us excellent food. It was a great time to get to know Dr. Giri better in a relaxed environment. Her talks were powerful and her enthusiasm was contagious.
I'm looking forward to our upcoming trip in February to continue with the important work that is set before us. Won't you join us? It will be life changing!
Posted by Linda Mandrayar at 8:48 PM No comments:

Excerpts from an exciting update from Cynthia

I was asked by Dr. Giri to org 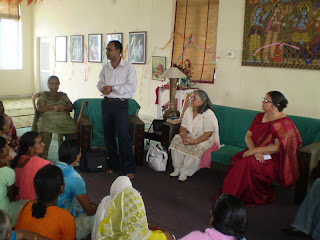 anize a program celebrating both International Elderly Day and Gandhi’s birthday on 2nd Oct. I asked the pastor of the Methodist Church in Mathura to pray about speaking, but he sent a local pastor to meet me. His name is Dinesh Lal. He pastors some home churches here in Vrindavan. He speaks some English also. He spoke at the program and was well received. He has a sweet spirit and a broken heart for the hurting. He has begun coming once a week to lead a Bible study. The first class began with a short meeting that was a follow up from the program so there were about 25 women there. A few left when brother Dinesh began, but we had 18 stay for the whole thing. He taught from John 4 on the woman at the well. The next week we had 8 attend the bible study. I had asked him to talk about the character of our Lord. He taught on the fruit of the Spirit from Galatians 5:22. He also translated so I could share my personal testimony. That was the highlight of my stay here! 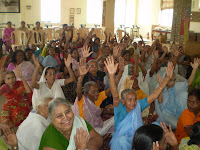 Brother Dinesh’s relative is the administrator of a Methodist Health Center that is about 40 klm from here. They conduct free medical camps in Vrindavan every Monday morning. Geeta, the manager, and I are going to visit the center on next Thursday morning, and get camps scheduled for the widows here at Ma Dham. God is Good.

I’m so looking forward to being with you all again. I arrive home 10th Nov.
Love, Cynthia
Posted by Linda Mandrayar at 10:35 PM 1 comment: 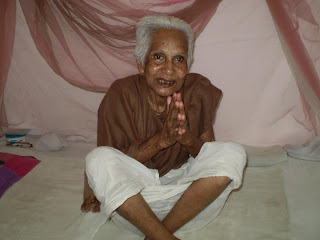 Cynthia has been busy these past few months that she has been living in Vrindavan at the Ma Dham shelter for destitute widows. One of her favorite tasks has been interviewing widows that she has been caring for and loving on so that she can learn more about them and pass on their stories to us. Please take a moment to learn about them to see if it would be in your heart to help sponsor the care for these women. Every bit helps and every hug counts! We will be highlighting one widow at a time so keep checking back to see more faces and read more stories.
Gauri Biswash

Age: approximately 75 When asked her age she said, “500!” She married at age 13. Her husband was 22. She had one son. She became a widow at age 40. Three years after her husband died her son threw her out of the house so she came to Vrindavan. She has no contact with her family because it is too painful. She has difficulty walking, but she can still get around on her own very slowly.

Posted by Linda Mandrayar at 3:20 PM No comments: 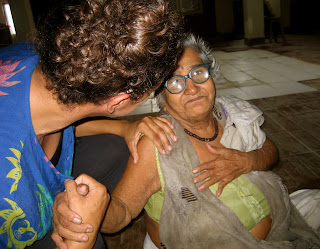 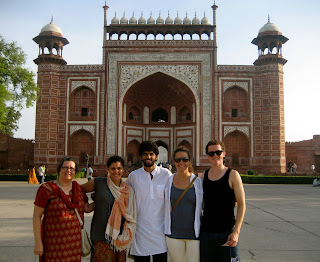 Our first official White Rainbow Project trip was a complete success! Joining us this first time were Pepperdine University students, Brianna, Austin and Sid and Palomar College student, Danielle. Cynthia was happy to greet us at the widow's shelter known as Ma Dham, as she had been there a few weeks in advance of our arrival. The weather was hot and there were lots of interesting bugs in our rooms at night, but we did not let that distract us from our main goal of ministering to the widows. We spent most of the mornings cleaning the rooms and bathrooms of the bedridden widows, gaining their trust and showing them kindness. Even though we could not speak their language, we were able to communicate with them perfectly as LOVE needs no translation. It was the best part of the trip!
We also visited the Bajan Ashrams (the temples where the widows chant) in Vrindavan. That was almost like watching a scene from the movie "White Rainbow". We saw thousands of widows there, chanting for hours. When some of the widows would fall asleep, the matrons of the ashram would hit them with a long stick. The men in charge were not happy when we wanted to interview some of them and let them know about Ma Dham. It is shocking to see how these women continue to be exploited. Some were so old, they could barely walk. We were also surprised to see many young widows, some with young children. One girl in particular had such a sad face. It really made an impression on us and we all vowed to help raise awareness and funds so that more of these women can come to Ma Dham and escape the cycle of abuse and neglect.
We are planing on making our next trip in November during Thanksgiving break. Won't you join us? It is definitely a life changing experience!
Posted by Linda Mandrayar at 10:40 PM 1 comment:

I am so thrilled! Cynthia Roberts just arrived in Vrindavan and is staying at the Shelter (Ma Dham) with the widows. Cynthia saw White Rainbow over 2 years ago and decided that som 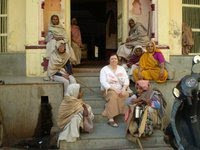 e thing had to be done. She has volunteered to be the first White Rainbow Project team member staying full time with the widows at Ma Dham. She will be our liaison between the sponsors and the widows. She will also be looking for tangible ways that we can express God's Love for these women. The first thing she noticed was how they were suffering in the heat. Since the electricity goes off constantly and there is not enough funds to buy petrol for the generators to keep the fans running, Cynthia decided that that would be her first gift. She is going to buy enough petrol to keep the electricity on so that the widows do not have to suffer the sweltering heat without fans. Thank you Cynthia for truly being the Hands and Feet of Christ! You are amazing and I'm looking forward to joining you in service in July. I hope it cools down a little by then :)
Posted by Linda Mandrayar at 10:29 PM No comments: 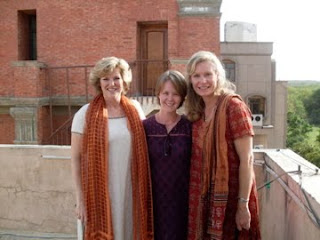 Seek justice,
rescue the oppressed,
defend the orphan,
plead for the widow. (Isaiah 1:17)
This is the expedition that brings freedom to both those who follow and those who are found.
If you spend yourselves in behalf of the hungry
and satisfy the needs of the oppressed,
then your light will rise in darkness,
and your night will become like noonday.
The LORD will guide you always;
he will satisfy your needs in a sun-scorched land
and will strengthen your frame.
You will be like a well-watered garden,
like a spring whose waters never fail. (Isaiah 58:10-11)
In preparation for my trip, I just finished reading Gary Haugen's book - "Just Courage- God's Great Expedition for the Restless Christian". Gary is the founder International Justice Mission-
www.IJM.org. Their mission is seek social justice for the oppressed, worldwide.
As I leave next week for Vrindavan- The City of Widow's" where so many women are oppressed, I pray that God will give me the courage to fight on their behalf!
Posted by Linda Mandrayar at 3:55 PM No comments:

More Angels on Board 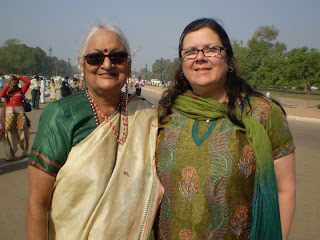 So much has transpired since my last post.... God has brought more people to help me with this project. Brianna is a young energetic recent Pepperdine graduate who saw the screening of White Rainbow that we had at Pepperdine University last month. She was so moved by the film that she has volunteered to help us get the non-profit up and running and she is planning on joining us on our first service trip planned for July 15-30. This trip is for Pepperdine students and anyone else that wants to join us. We only have space for 12 people so if you are interested, email me right away!!!
The next Angel is Cissy Watson, a good friend from our Pepperdine days, who will be joining me for the exploratory trip that I am going on next week. Cissy has lots of experience in non-profit organizations as she has been involved with ministries in Honduras and Africa. Pray for us that God will reveal to us exactly what he would have us do.
The next and most exciting development is my new friend, Cynthia Roberts, from Arkansas. Cynthia saw White Rainbow over a year ago, and was moved to go to Vrindavan to check out the situation for herself. She found the Guild's Shelter- Ma Dham- and she feels led to stay and work there for at least 5 months. She is willing to help with the White Rainbow Project by being a permanent presence there. God is so Good! (Cynthia is standing with Dr. Mohini Giri of the Guild of Service in the picture above)
Posted by Linda Mandrayar at 9:20 PM No comments: